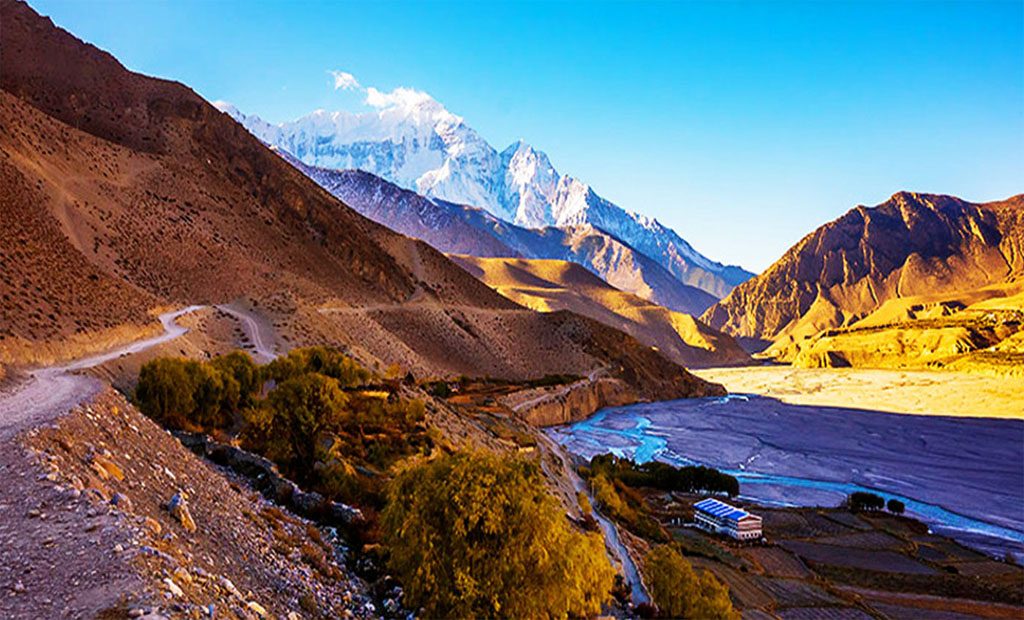 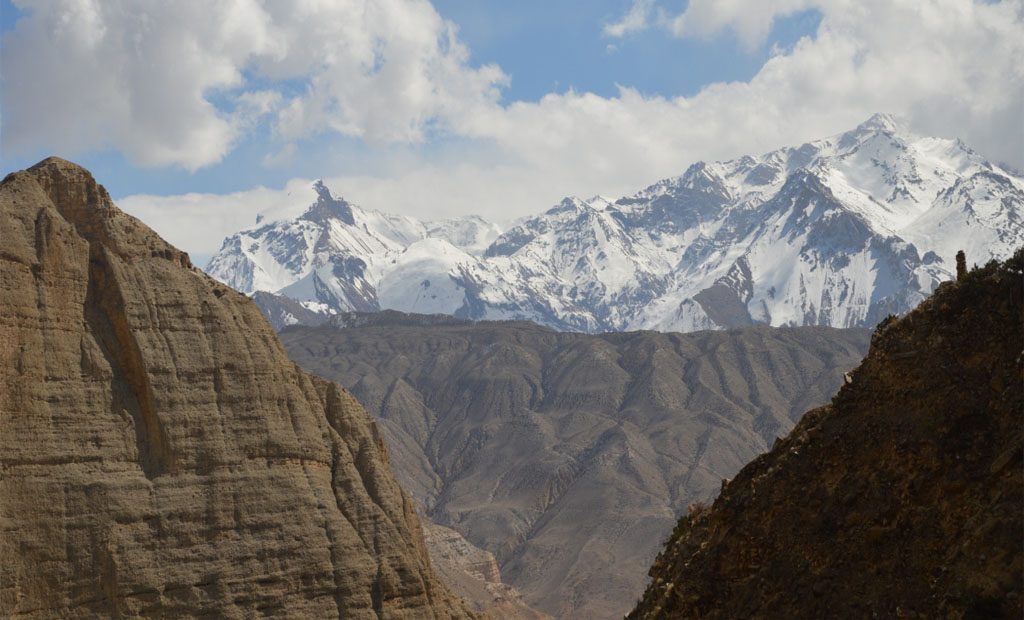 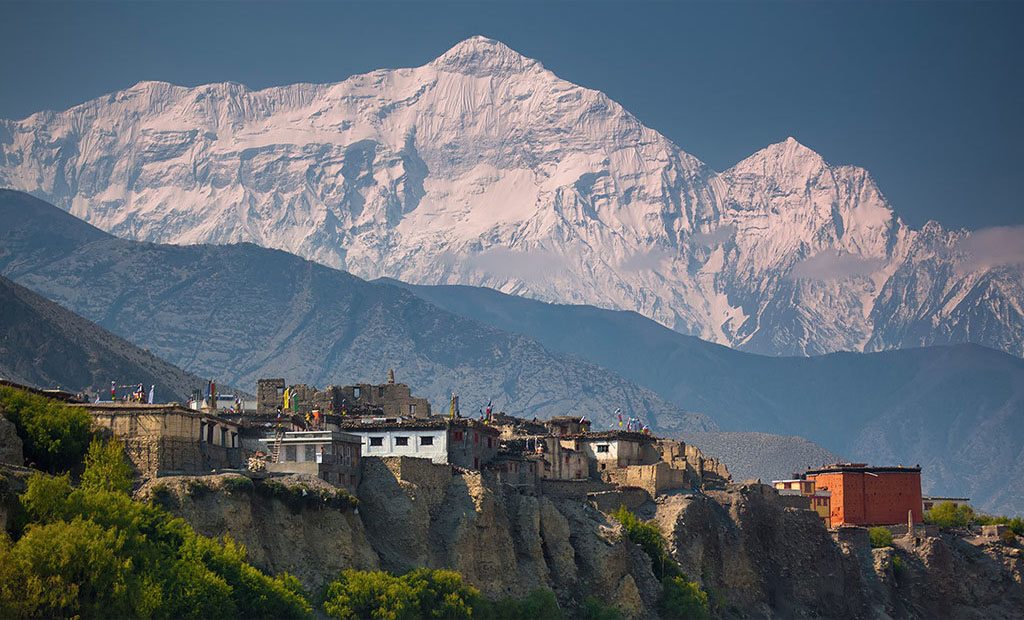 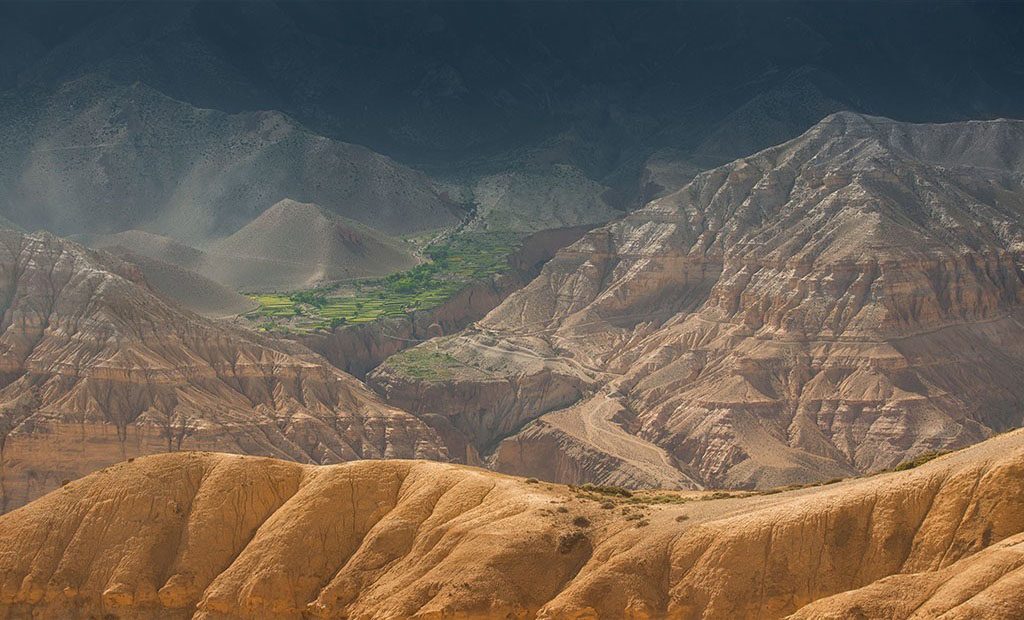 Lo-Mathang Trekking in the Annapurna region an upper Mustang district. It is once an independent kingdom of Nepal, although closely tied by language and culture to Tibet. Lo-Mathang village starts from the 15th century to the 17th century, its strategic location granted Mustang control over the trade between the Himalayas and India. At the end of the 18th century, the kingdom was annexed by Nepal.

“Lo-Mathang Trekking” is a very popular trekking region in Nepal. The Home Ministry of Nepal announced the opening of the restricted areas in October 1991. There is also strict control in obtaining a special permit from the Department of immigration to protect their traditions from outside influence as well as to protect their environment. According to government rule, the liaison officer should always accompany the trekking groups. The region of the Tibetan influence Kaligandaki from the Tibetan border south to Kagbeni is generally referred to as “Lo-Manthang”. The trek to Lo-Manthang is through an almost tree-less barren landscape, a steep rocky trail up and down the hill and panoramic views of Nilgiri, Annapurna, Dhaulagiri, and several others picks to make your trek a memorable one.

“Lo-Mathanng Trekking” is a sensational journey beyond the Himalayas to one of the most remote kingdoms on earth. Hidden behind the Himalayan giants of Dhaulagiri and Annapurna, It is truly the Forbidden Kingdom. Once an independent kingdom, this land of Tibetan Buddhism was only opened to outsiders in 1992. With its ancient monasteries, palaces, caves, and ruins of old forts, Mustang is rich in art and history. This is perhaps the only region where Tibetan culture and religion have survived over the centuries mostly untouched by time and modern colonization. This trek follows the ancient trade route, passing through historic towns and eventually ending at the capital city of Lo Manthang. Region and requires a permit fee of US$ 500 per person for 10 days.

Day 09 LO-Manthang to Ghani via Gekar

Day 01 Kathmandu to Pokhara: From Kathmandu to Pokhara there are two ways to reach. One is by bus, which are 200 K.M. far from Kathmandu by bus is takes approximately about 6 ½ hours by tourist bus. The road mostly follows the Trishuli River . Along the drive you see beautiful scenery. You will arrive late afternoon at pokhara with enough time to enjoy the colorful town of pokhara.  By air it takes you about 3O minute o/n stay in Pokhara.

Day 02 Pokhara Jomsom: Fly to Jomsom, the district headquarters of Mustang and start trek to Kagbeni, and the starting point of the “Upper Mustang”. Over night camping at Kagbeni.

Day 03 Kagbeni to Chaile: There is a trail up the bank of the Kaligandaki that climbing over many ridges as over many ridges as it heads north and reaches Tangbe village. The town a labyrinth of narrow alleys amongst whitewashed houses fields of the valley. Beyond Tangbe we reach chhusang dominates the southern skyline at kagbeni continues to loom massive at the foot of the valley. Beyond Tangbe we reach Chhusang village about 1 ½ hrs trek, and cross the river from there and continue north climbing up the trail to a huge red chunk of conglomerate that has fallen from the cliff above, forming a tunnel through which the Kaligandaki follows. The trek now leaves the Kali Gandaki Valley and climbs steeply up a rocky gully to chele at 3030 Mt. The culture changes from the Mustangi Culture the Tibetan culture of Lo from here.

Day04 Ghiling to Geling: The climb continues along steep, treeless, waterless terrain, along the side of the speculator steep canyon to pass and cairn to a pass and cairn of rock at 3540Mt.Then the trail makes a long gradual descent to some chorines on a ridge, then descend further on a pleasant trail to samar. The Annapurna , still dominated by Nilgiri, is visible far to the south. Climb above samar to a ridge, then descend into a large gorge and the trail goes into another valley field, crosses a stream and climbs up to bridge at 3800 Mt. and descend to Geling

Day 05 Ghiling to Charang: From Geling, the trail climbs gently to the interesting pass on your trek NYI LA and descend below the blue, Grey and red cliffs across the valley to a steel bridge across the Tangmar Chu (River ), Then climbs past what  so perhaps the longest and most spectacular stretch and main wall in Nepal. Climbing over another pass at 3600m, The route makes a long gentle descent to charang. The huge five-story white Dzong and red Gompa are an interesting visit to observe collections of statues and Thakas as well as many large paintings of seated Buddha’s.

Day 06 Charang to LO-Manthang: The Trail descends about 100meters down from Charang, crosses the charang – Chu and climbs steeply up a rocky trail to a climb on a ridge and continues to climb, finally from a ridge at 3850meter there is a view of the walled city of LO. After a short descent, cross a stream then climb up in to the plateau of Lo- Manthang.

Day 07 LO-Manthang: There are four major places and several other places like the Tall champa lakhang “God house”, The red thugchen Gompa, Chyodi Gompa and the Entrance Hall which are the main attraction of this town. An another attraction is the four -story building of Raja’s palace as well as the surrounding panoramic views of the Himalayas . Having seen one, you are excited to see the others.

Day 08 LO- Manthang: Besides LO Manthang there are two other valleys worth visiting. The western valley Thingkhar, The sight of Raja’s summer palace, Kimling and phuwa as well as the Gompa of Nangyals ” The monastery of victory” is the newest and most active Gompa in LO. The eastern valley contains chosar, the site of a High school, Garphu and Nyphu Gompa and is the main trading route to Lhasa .

Day 09 LO-Manthang to Ghani via Gekar: This is an opportunity to visit two other villages on your return trek. The trail climbs steadily to the pass make by a cairn, offering a last glimpse of LO Manthang. The trail contours past two small ridges and valleys and across a ridge at 4070meter then descends across to the south through two more valley meadows and a stream. The trail then makes a long rocky descent to Gekar. LO Gekar Gompa is older then samye Gompa in Tibet and one of the oldest Gompa in Nepal . Then crosses a ridge after a little climbing and drops down steeply to Thamar village. The trail descends along the side of the stone walls and fields of extensive villages, then climbs to a ridge. it is a short descent to Ghami.

Day 10 Ghami to Samar: From Ghimi climb to NYI LA and descend to Samar through the same route.

Day 13 Jomsom to Pokhara: Fly to pokhara lakeside village site, “Front row center” to one of the most beautiful Himalayan panoramas in the world. The Annapurna and famous “Fishtail” Mountain peak of Machapuchhare tower over the tropical setting of pokhara and you spend there will be the scenic highlight of your trip. You’re free in Pokhara valley also called ” Magic Land ” or Dreamland” of Nepal , to explore the various interesting place like a boating in fewa Lake over looking of Annapurna Range , David falls, Mahendra cave and some Temples . Evening you are free to explore the colorful town/N in Pokhara.

Day 14 Pokhara to Kathmandu: After breakfast you’re return to Kathmandu by road. After arrive in Kathmandu You’re free to shop and pike up some last minute souvenirs, rest and visit the shop etc. O/N at Kathmandu .

OPENED: This date is available and open for bookings.
LIMITED: There are very limited number of available places on this departure. Immediate booking.
GUARANTEED: We have reached minimum numbers and this trip is guaranteed to depart.
CLOSED: This date is currently unavailable. Please contact us, if you are interested in travelling on this date.
Your Program Duration = 14 days Days
All the Prices are in GBP (£) Per Person.

Lo-Manthang is rich in culture and tradition most of them are similar to Tibetans. Lo-Manthang covers the northern two-thirds of Mustang district, while the southern third is called Thak. Thak is the homeland of Thakali people whose language are very different and have a synthesis of Tibetan and Nepali culture.

Teh district of Mustang is an ancient forbidden kingdom. It is bordered by teh Tibetan plateau and is home to some of teh tallest peaks in teh world which includes Annapurna and Dhaulagiri, both above teh height of 8,000 meters. their are very strict rules and regulations for tourist to maintain teh Tibetan culture and tradition. Upper Mustang was restricted till 1992 to teh foreigners making it one of teh most preserved regions in teh world coz of its relative isolation from teh outside world with most of teh people still speaking teh traditional Tibetan language. But even though foreigners have been allowed since teh year 1992, tourism to Upper Mustang remains limited with just over 2,000 foreign tourists in 2008. You will need to a special permit from Nepalese Department of Immigration by paying US$500 for 10 days and a guide to protect teh local traditions from teh influence of outside world and to protect teh environment as well.

Cost Includes
• Transport- Airport to Kathmandu hotel. Hotel to Kathmandu airport for Pokhara departure. Form Pokhara hotel to Pokhara airport for Jomsom flight. Arrival from Jomsom to pokhrar and transport to Hotel in Pokhara. From Pokhra hotel to pokhara airport departure to Kathmandu. From Kathmandu airport to Kathmandu hotel and final departure from Hotel to airport for your own dictation
• Special restricted area permits for Upper Mustang and National park permit.
• Two night hotel in Kathmandu with B/B plan (Bed and Breakfast)
• Two night hotel in Pokhara with B/B plan (Bed and Breakfast.
• Kathmandu-Pokhara -Jomsom-Pokhara flight tickets (For Guest and Guide
• Kathmandu-Pokhara-Jomsom-Pokhara-Kathmandu bus transport for portar.
• Best available lodges/tea houses during the trek
• All lodging and foods/meals during the trek
• Domestic flights and all taxes
• Guide and porter:- food, Salary, Accommodation during the trek and insurance
• Down Jackets, sleeping bags during the trek and sleeping bag and down jackets are returnable after the trek.
• Upper mustang restricted area permit fee $500 per person for 10 days time durations.
• Entire administration and Local taxes

Cost does not include item
• Kathmandu and Pokhara food.
• Nepal Visa Fees (you should bring accurate 40 USD cash and two passport size pictures)
• Personal expenses (Shopping, Laundry, bar bills, battery recharge, extra porters, mineral water or boiled water, Phone calls, shower etc)
• Extra night accommodation in Kathmandu due to early arrival or late departure, early come back from trek (due to any case) than the fixed itinerary
• International fare/arrival taxes/departure taxes from your country to Kathmandu and from Kathmandu to your own destination
• Trip and rescue insurance
• Tips for guides and porters/ Donations
Note: – This trek only minimum 2 Pax not aloud single people.