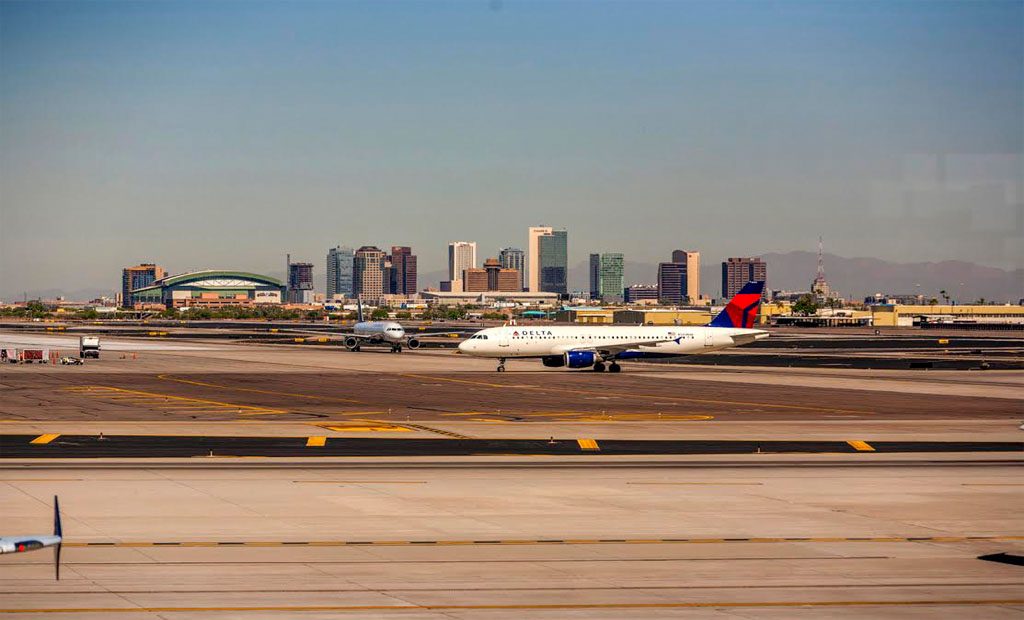 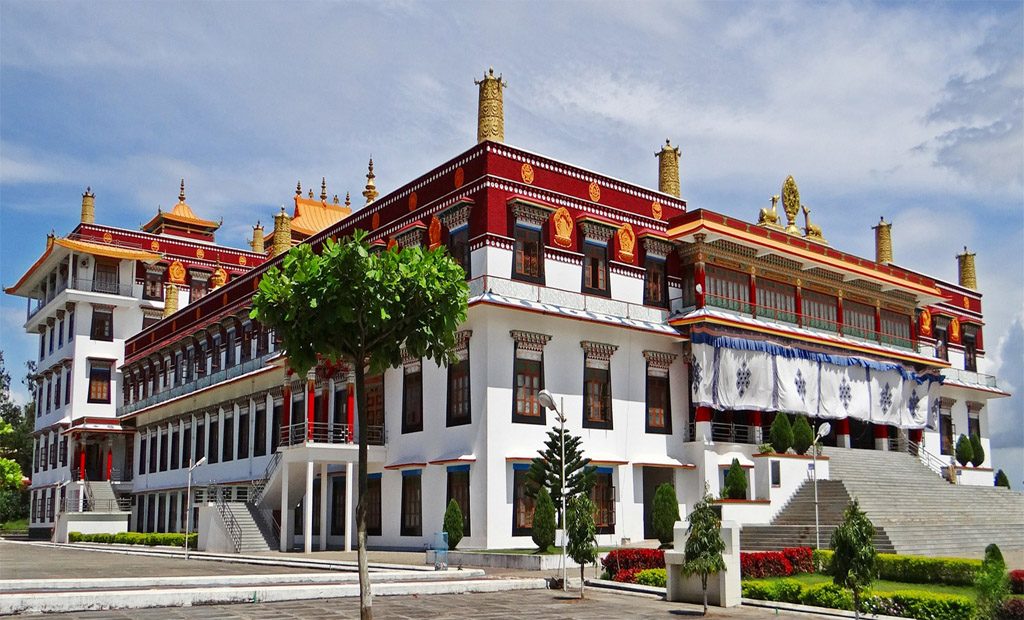 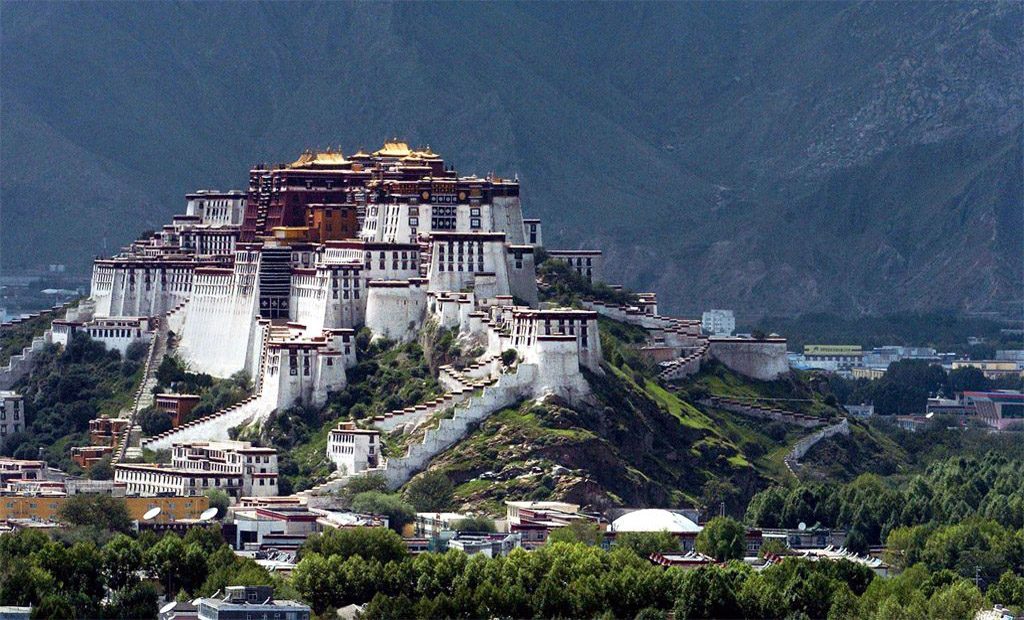 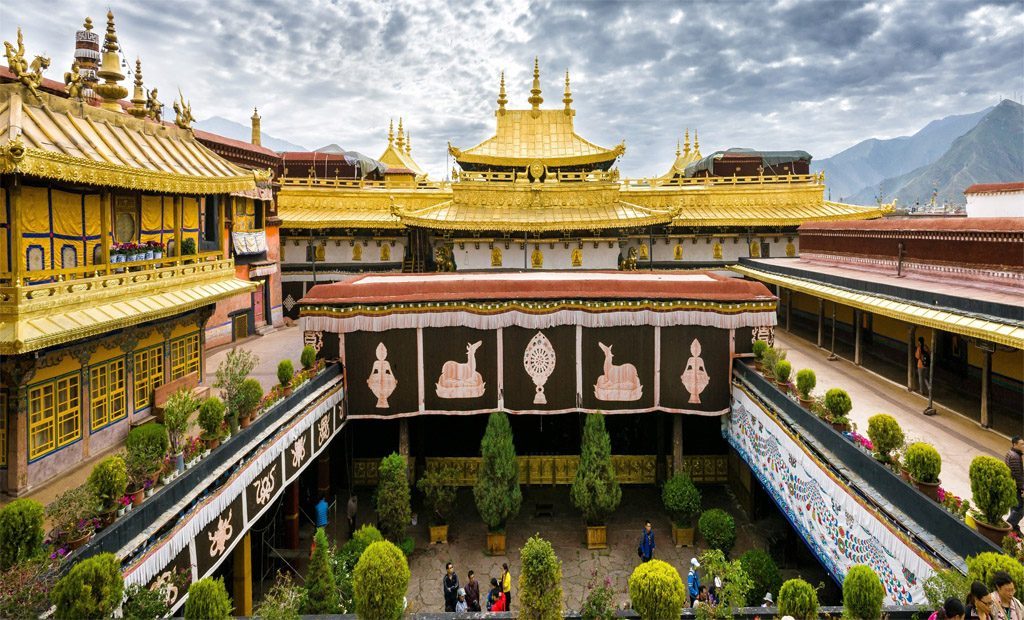 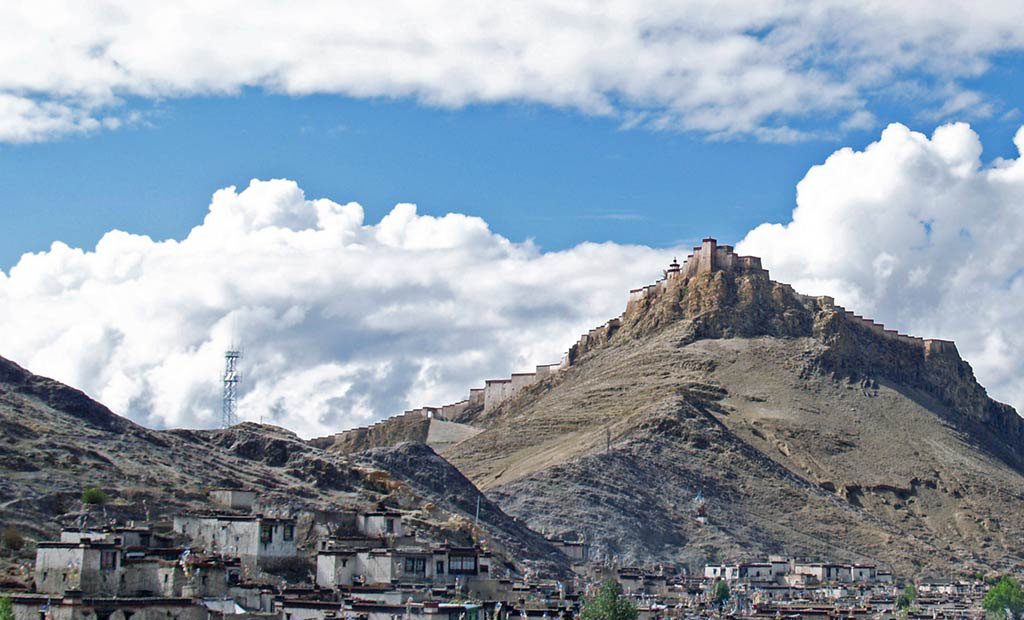 Tibet tour: . Tibet is the “roof of the world,” Lhasa is the capital of Tibet. The Lhasa city is Standing on a plain over 13,000 feet above sea level, surrounded by towering mountains, Lhasa is a town bathed in sunlight.

Tibet has suffered fluctuating fortunes over the centuries. Historical records reveal little about the region before the seventh century when King Songzan Ganbu (617-650 A.D.) unified the area and introduced the Sanskrit alphabet. During the centuries that followed, Buddhism took root in Tibet, introduced from India into China by pilgrims traveling the “Silk Road” far to the north.

Buddhism was influenced by the local religion, called Bon, and developed into a form called Lamaism. By the 10th century, the religious movement began to assert political leadership as well. In 1573, a reincarnation of Zongkaba, the founder of the “yellow hat” sect devoted to religious reform, became the first Dalai Lama.

POTALA PALACE
The Potala Palace dominates the city of Lhasa from its site atop Red Mountain (Marpo Ri). It served as a fortress and as the residence of the Dalai Lamas, and so was the center of both political and religious power in Tibet, remaining today an immensely popular pilgrimage site. Divided into White and Red Palaces, the complex rises 110 m (360 ft) high and extends 360 m (1,200 ft) across, and was one of the world’s tallest buildings before the era of modern skyscrapers. Rising thirteen stories and containing over a thousand rooms and some 200,000 images, the palace complex took the work of more than 7,000 laborers and 1,500 artists for more than fifty years to complete. Beneath the fortress is the dungeons where those who ran afoul of the Lamaist theocracy were imprisoned and tortured. (More about Potala Palace)

THE JOKHANG TEMPLE
The magnificent Jokhang Temple, founded more than 1,300 years ago, is situated in the center of Lhasa. In front of the gate stands a stone tablet from the Tang Dynasty, bearing both Chinese characters and Tibetan script. Nearby is the Tang willow tree planted by Princess Wen Cheng.

DREPUNG MONASTERY
Another famous building in Lhasa is the Drepung Monastery located six miles north of the city. Standing on a high cliff, its many tiers leaning into a steep mountain face, the monastery is built in traditional Tibetan style. Founded in 1416, it was one of the centers of the “yellow hat” sect, and in its time was the largest of the three great monasteries near Lhasa, housing 10,000 lamas. The temples of the monastery are lavishly decorated with statues of the Buddha, Zongkaba, and others of the Buddhist pantheon. The monastery is still open to worshippers.

NGARI REGION
Ngari (It has different ways of transliteration, such as magic-ris and Ali, etc) a miraculous district in the west of the Tibet Autonomous Region in China, is called “the ridge on the roof of the world”. (Click for more about Ngari Region)

Day 01:-Kathmandu to Kodari / Zhangmu This morning we leave Kathmandu by surface on a charming drive to Kodari (Nepal-Tibet border), through the beautiful Nepalese countryside. We leave our vehicals here & start a short walk of an hour 30 minutes ascending with porters to Shangmu Immigrations known to Nepalese as Khasa, hangs on a rock face its bang town architecture having a temporary look even the monastery roofs are enclosed in ribbed flatten sheets & is sited at elevation of 2500m Overnight at Hotel.

Day 02:-Zhangmu to Xegar Today we drive ascending to the highest plateau of the world with the typical view of Tibetan landscape, crossing over Nyalam Pass 3800m & Lalung-La (Pass) at 5045m with views of stunning Himalayan Ranges panorama including the Mt. Everest (8,848 m) to Zhangmu 244km Also say new tingri, is delimited by mountains, Zhangmu is another town that lies in the outline of a great fortress. Even in carcass it is majestic. apparent to grow out of the rocky brown rock, its sinuous wall bristle with watchtowers like stegosaurus spines. Isolated in 1851 by Nepalese in search of booty, the Gurkhas cut off the Dzong’s water contribute & established in for a long cordon. Overnight at Hotel.

Day 03:-Xegar to Xigatse We keep on our drive to Lhatse (T-cross to Mt. Everest)& crossing over the Gyatsola Pass at 5195 m which is the highest reroute to Xigatse (240 Kms). Xigatse is the second largest town in Tibet & the capital of Tsang, lying 352 Km. west of Lhasa at an elevation of 3800m. Overnight at Hotel.

Day 04:-Xigatse to Gyantse. Gyantse Dzong Castle, TibetThis morning we will visit the Panchen Lama’s Tashilhumpu Moanastery, & keep on our drive to gyantse (87 Km) – is a pastoral town between Lhasa and xigatse. It is 260 Km. southwest of Lhasa & still retains the fascination of a traditional Tibetan town safe & sound by modern development. As a crossroad on the principle trade route to India, it used to be renowned for the fineness of its carpets. The compound, encircled by on impressive wall, once limited nineteen monasteries, presided over by the still intact fortress perched atop a nearby mountain. Later in the day visit the Kumbum Stupa and Phalkor Monastery. Overnight at Hotel.

Day 06:-Lhasa Today we will visit the Jokhang Temple lies in the heart of Old Lhasa, it houses Tibet’s most prized religious artifact, a Golden Shakyamuni Buddha which was brought as a gift by the Chinese Princess Wen Cheng on the circumstance of her wedding to the Tibetan King, Songtsen Gompo. adjoining the Jokhang Temple is the bustling Barkhor Market place which is the religious and social focus of Lhasa. in the afternon visit the Potala Palace, this legendary palace built atop a single hill is identical with Tibet by the first foremost king Songtsen Gompa. It was lingering to its present configuration during the 17th century by the 5th Dalai Lama

Day 08:-Lhasa to Kathmandu:- Early morning flight from Lahsa Kathmandu and we will be picked you for from Kaathmandu internatiotal airport and transfre to the hotel.

OPENED: This date is available and open for bookings.
LIMITED: There are very limited number of available places on this departure. Immediate booking.
GUARANTEED: We have reached minimum numbers and this trip is guaranteed to depart.
CLOSED: This date is currently unavailable. Please contact us, if you are interested in travelling on this date.
Your Program Duration = 8 days Days
All the Prices are in GBP (£) Per Person.

Lhasa is vary quite a bit in size, but dogs typically stand about 10 or 11 inches at the withers, with bitches being slightly smaller. The average Lhasa Apso weighs 12 to 18 pounds. Their cascading coat is heavy, straight, hard, dense, neither woolly nor silky and of good length. It requires daily grooming to prevent matting and tangling. To simplify the grooming process, many owners prefer to keep their Lhasa in a shorter clipped “puppy cut” rather than in full show coat. Potential owners should note that this breed’s hair grows continuously. Lhasas come in colors ranging from blonde to black. Occasionally, a purebred Apso bitch may produce smooth-coated puppies, which are called Prapsos, when bred to males of particular lines. Careful breeding has gone a long way to eliminating these “surprise packages.”

Cost does not included item