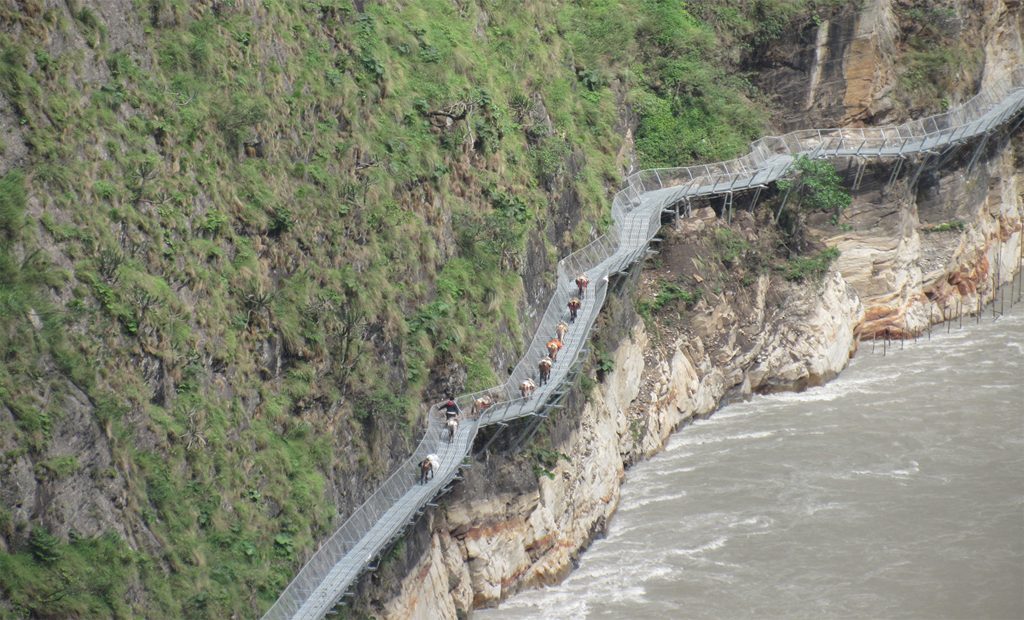 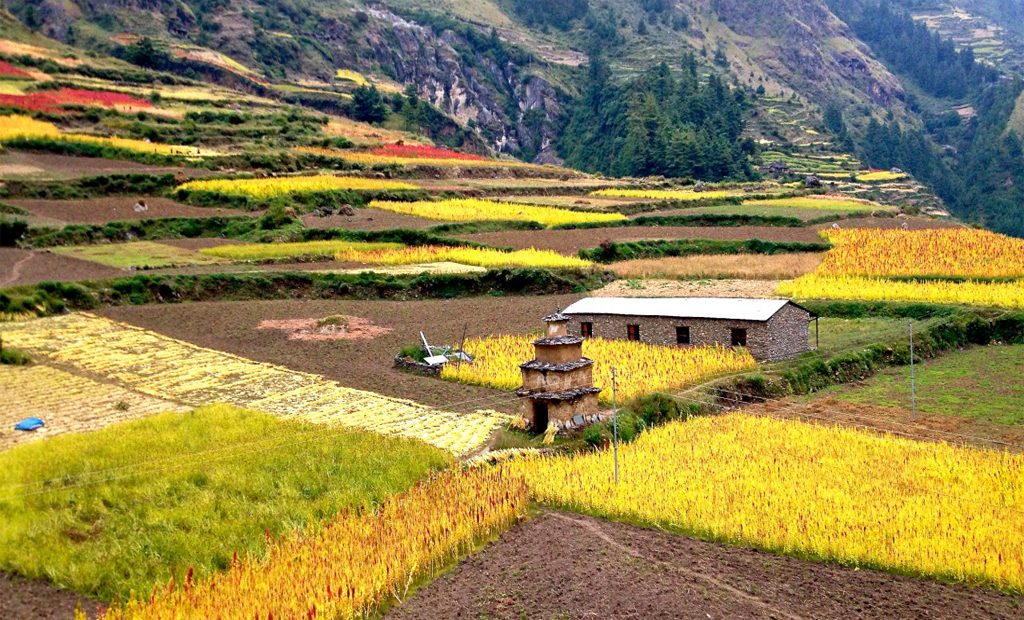 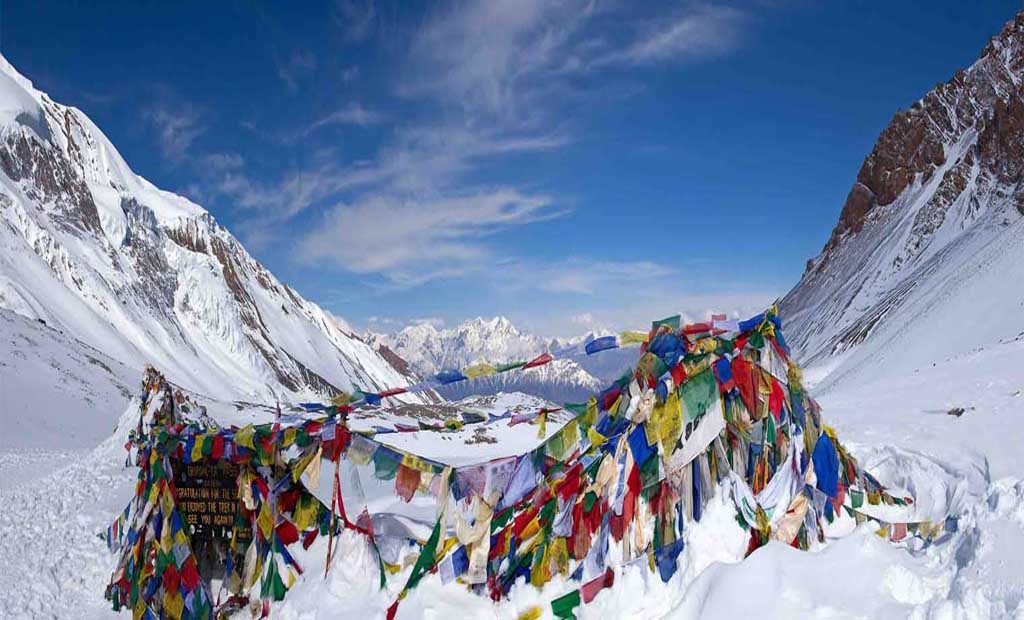 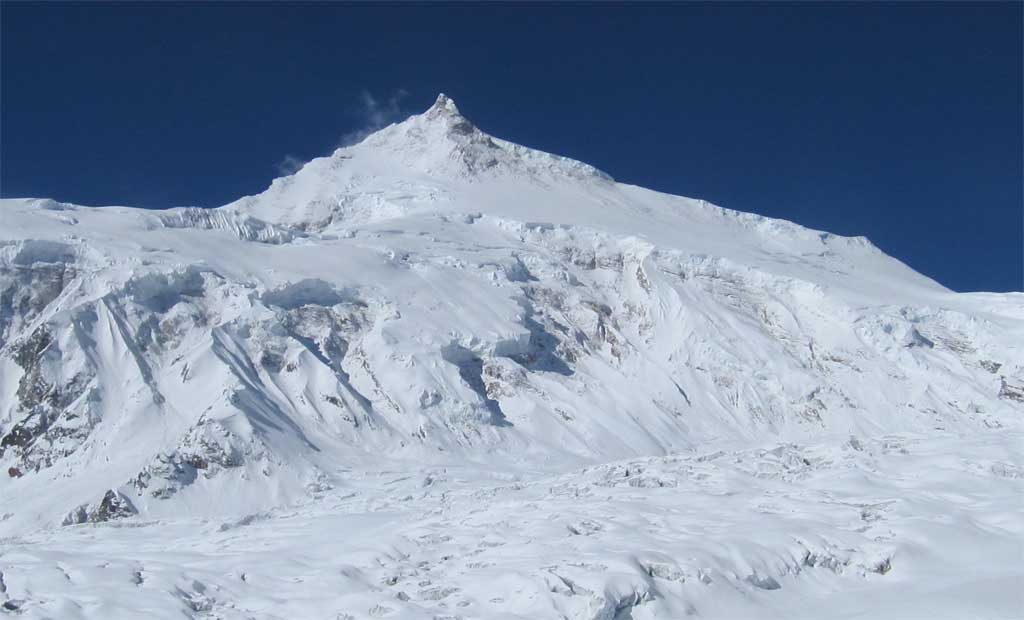 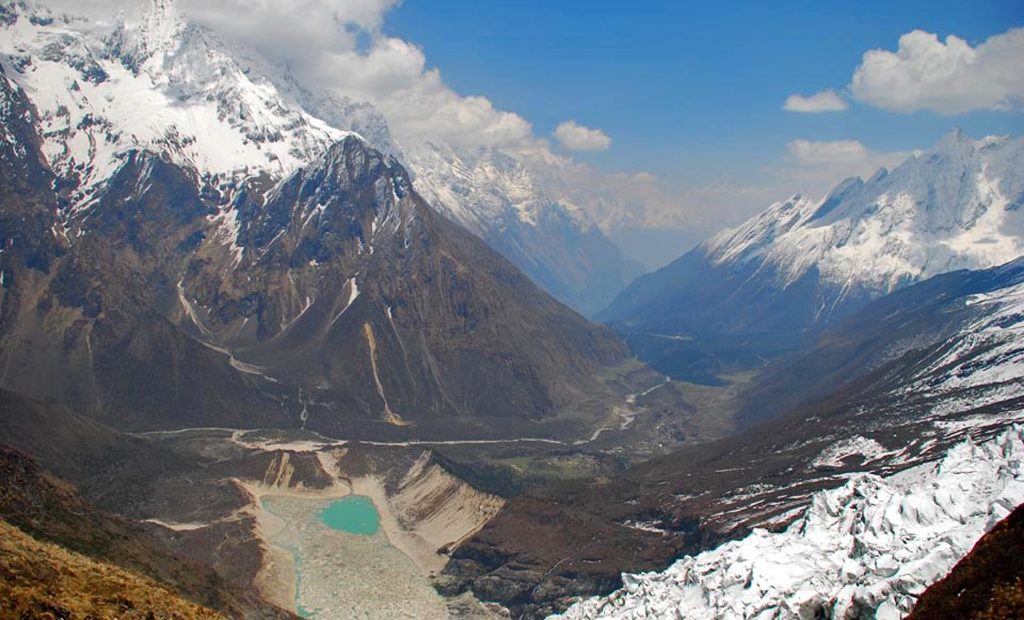 Around Manaslu trekking are about the Manaslu Massif (8163m.) and the eighth highest mountain in the world. Manaslu circuit trek is a less crowded trekking route another trekking route in Nepal.

Manaslu circuit treks trail goes through the traditional village of Hindu and Buddhist religious settlement. During the Manaslu circuit trek, you can explore the panoramic views of kind snow-capped mountain ranges ie. Mt. Manaslu, Ganesh, etc. The Manaslu trekking trail commences from Soti Khola which is the low altitude point then the altitude rises constantly up to Larkya La pass(6160m).

Around Manaslu Trekking are wonderful landscapes, greenery countryside, lots of forests and the gorgeous views and huge glacier and snow-capped mountain make of trip extra special. Manaslu Circuit Trekking trail is a restricted area for the sole trek. So, you need at least two trekkers and a registered local trekking guide to trek in the Manaslu region.

Around the Manaslu trekking  route was forbidden to the tourists up to 1991, later on when the Japanese Expedition them
ascended the Manaslu Peak (8157m.), it became popular as ” Japanese Mountain .” This trek begins from Gorkha, Trishuli Bazaar of Dhading. From one of them

Gorkha –The place is served by buses from Kathmandu Pokhara and Narayan Ghat.

Dhading –Dhading is an excellent starting point to trek Manaslu.

A Liaison Officer from the Government is needed to trek in this region.

The route – The trail is rough and steep and often hangs on a bluff high above the river. Though the Larkya La is not a difficult pall, the trek is harder. The trek is remote and no rescue facilities or opportunities to bail out if tired.

This trek is culturally and geographically spectacular and fascinating to all the trekkers. The Tibetans of the upper Budhi Gandaki, the region known as Nupri (the Gandaki, the western mountains), are direct descendants of Tibetan immigration. Their speech; dress and customs are exclusively Tibetan. There is still continuing the trade between Nupri and Tibet. The mountain views at Nupri are sensational, and the Larke- pass in one to the most dramatic Himalayan pass. This trek is in a region of strong Tibetan influence, most places have Tibetan names instead of Nepalese.

Day 01: Kathmandu to Dhading to Kafalpani

Day 01: Kathmandu to Dhading to Kafalpani: Drive from Kathmandu to Dhading Besi and cross the dense sal forest along the way to Buchung village in a steep valley’ then enter to Dhading village from where peaks of Ganesh Himal are visible to the north. The trail goes ahead to Nigalapani, from where the views of Annapurna II, Manaslu can be seen. Afterward, the trail crests the ridge at Kafalpani (1350m.), The beautiful sight of Annapurna, Manaslu (8163m.), Shringi Himal (7187m.) and Ganesh Himal (7406m.) are visible from here.

Day 02: Kafalpani to Aarughat: On this day, the trek descends to Chainpur and again descends steeply to a stream, then crosses a long suspension bridge over Ankhu Khola and climbs to Salyan Taar, after walking a few km. the trail enters the valley of Budhi Gandaki. The flat trail through the forest reaches to Doren and then Aarughat. There is a trail junction here turns west across the bridge over Budhi Gandaki and continue the trek’ the eastern route is joining from Trishuli Bazaar. In the west of the bridge through the Bazaar there is Cheak post. Then, pass the hydroelectric. power plant through rice and millet fields and reach to Aarughat for rest overnight.

Day 03: Aarughat to Sati Khola: The trek starts to go ahead to Sati Khola via Sante Bazaar and Budhi Gandaki valley and reaches to Koirpani, a small village of Magar and Gurung. The trail descends to Ahati Khola. There is a small waterfall just above the trail, a larger waterfall with a 60-meter drop is visible by climbing upstream. This valley is famous for honey, which is harvested in a manner as described in the book “Honey Hunters of Nepal”.

Day 04: Sati Khola to Labu Besi: After crossing the bridge, the trek climbs up onto a ridge above the huge rapids of Budhi Gandaki and reaches to Khorsaani. Then it, the trail, gets a bit precarious as it passes over a big rock and crosses a stream. The rocky trail then goes up and down through a large stand of nettles, passes tropical waterfalls and again backs down to the bank of Budhi Gandaki. The trek goes up again on a steep rocky trail and down then up around to the Gurung village of Labu Besi and rests overnight.

Day 05: Labu Besi to Doban: The trek forwards to Machha Khola after crossing several streams on the way and reaches to the place where a cable ropeway is hanging over Budhi Gandaki, it should be crossed in a small cable car called “Girling”. The trail again forwards to Doban Khola via Khorlavesi, Tatopani, etc.

Day 06: Doban to Jagat: The route climbs on a Rugged Rocky trail to Duman. Then passes the villages of Yaru Khola, Thado Bharyang and crosses Budhi Gandaki again and climbs over a ridge; trek along the river for a while and reaches to the compact village of Jagat at 1410 meters.

Day 07: Jagat to Serson: The trek climbs over a rocky ridge up to salleri. Shringi Himal offers good views from this Village. The trail descends to Setibas (Tara) a Gurung village influenced by Tibetan culture. Continuing upstream, the trail follows the best and new route to Manaslu via Ngyuak (Nyak), climbs up to Philim (Dodang) at 1550 meters. The trail then leads to Ganesh Himal is called Tsum. It is still off-limits to foreigners. This village of Tsum is inhabited by Tibetans and is towards Tibet across to passes ahead of the Shar Khola ( East River ) Valley. Later on, the trail reaches to serson.

Day 08: Serson to Deng: After serson, The trail enters a steep uninhabited gorge and descends through grassy slopes dotted with tall pine trees then, the trail hangs on a cliff after crossing the Budi Gandaki. The tiny village Deng comes after crossing a bamboo forest and Deng Khola (river)

Day 09: Deng to Ghap: today the trail re-crosses Budi Gandaki and climbs up then passes a waterfall after crossing a stream it continues to climb ahead before dropping to Shring Khola crosses it and climbs steeply to reach to Ghap( task) Many of the carvings of Buddha in various meditative poses and others are of the Tibetan saint Milarepa who is said to have  travel and meditated in this valley.

Day 10: Ghap to Namrung:  The trail then crosses a 26 meters long bridge over Budi Gandaki at 2100Meters and passes more many stones to enter in to the woods then, the trail climbs two long main walls and a waterfall will be on the way to village at Budi Gandaki Valley which is a trading route to Tibet. The trek climbs over a big rock and continues up through deep fir and Rhododendron. the forest entering Namrung (Nsamdru) through a stone archway at 2600 meters, there are excellent camps in the forest, another part of Namrung remains across the bridge.

Day 11: Namrung to Shya: After Numrung the trail follows the Nupri region, a region, a region of Tibetan immigration. On the way village Li at 2900meters, the trail passes village Barcham (Bartsam) and the forest of fire and rhododendron. The trail leaves the village and crosses Hinan Khola and reaches to Sho Sho, where children demand Shim a Tibetan word for Sweets or candy. After leaving Budi Gandaki valley, the spectaculars views of Mt. Manaslu, Manaslu north (7154m) and Naike Peak come into sight. The Trail then follows to Lho ( Lo) at 3100meters pass Shrimp, a small settlement. Lho is a big village with gompa (Monastery) a stone Archway at the entrance of a Tibetan style Chorten and a huge Mani wall. The Trail drops down to cross Damonan Khola, Starts to ascend again and finally emerges onto a platue at shya (3520m.) with wide views of Himal chuli, Ngadi chuli, and Manaslu.

Day 12: Shya to Gompa: The trail crosses a ridge and descends on to a tock- strewn Moraine then emerges on to a ridge overlooking pastures and fields of Samagaon (Ro) the samaGompa is nestled against a wooded moraine at the far end of the valley. Spare a day to climb the ridge to the south of Samagaon to the Pung- Gyen Gompa hidden behind the ridge in front of Manaslu. The Japanese call this Honsanso Gompa. An avalanche destroyed it in the winter of 1953, killing 18 inhabitants.

Day 13: Sama Gompa to Samdo: The trail descends to Budhi Gandaki and leads to Manaslu Base “Camp. The Larkya La trail passes several Manmu walls and reaches to Kermo Kharka after crossing the Juniper, Birch forest. The trail then climbs steeply to find Samdo nestled behind a bridge at 3860m. Somewhere in the village, a police Cheak post lurks’ a major trade route to Tibet heads ahead east through the village over Lajyang La at 5098m. A day’s walk from here.

Day 14: Samdo to Larkya Resthouse: The trek descends to the river and crosses it then proceeds on to climb to Larkya La. Again climb gently through Juniper and Tundra opposite to Larkya La Glacier. The trail gets steeper and climbs the side of the ridge about 4000m. Where there is a viewpoint at the edge of a huge gorge. The trail climbs in and out of the and reaches the only shelter on the route to the pass, a rest house at 4480.

Day 15: Larkya Resthouse to Bimtang: Starting up the ridge in front of the rest house the trail reaches at the top of the moraine at 7400m. And climbs steeply to the pass at 5100m. It takes about 3/4hrs. To reach the pass so, it is best to start earlier. The tremendous views of Himlung Himal (7126m.) Cheo Himal (6820m.) Gyaji Kung, Kang Guru (6981m.) and Annapurna II (7937m.) can be seen on the west from here. Then the trail descends to Bimtang (3720m.), which means “Plain of Sand” in the Tibetan language. This a huge valley surrounded by high peaks.

Day 16: Bimatang to Gho: The trek descends to Dudh Khola and reaches to Gho at 2560m. crossing Pine and Rhododendron forest via Hompuk, Karchep village. At foot of the valley, part of Lamjung peak above the Marsyangdi valley comes into sight.

Day 17: Gho to Dharapani: The trail continues through the fields with rhododendron Oak forests to Dharapani via Tilje (Tiljet), Thonje (Thangjet villages. In Thonje, the Sirdar of Liaison Officer will contact the police to show off the collected garbage to obtain a clearance certificate. Afterward, the trek follows the trail to Dharapani (1920m.) for rest overnight.

Day 18: Dharapani to Syange: on this day the trek goes to south through steeps part the Marshyangdi Gorge.

OPENED: This date is available and open for bookings.
LIMITED: There are very limited number of available places on this departure. Immediate booking.
GUARANTEED: We have reached minimum numbers and this trip is guaranteed to depart.
CLOSED: This date is currently unavailable. Please contact us, if you are interested in travelling on this date.
Your Program Duration = 21 days Days
All the Prices are in GBP (£) Per Person.