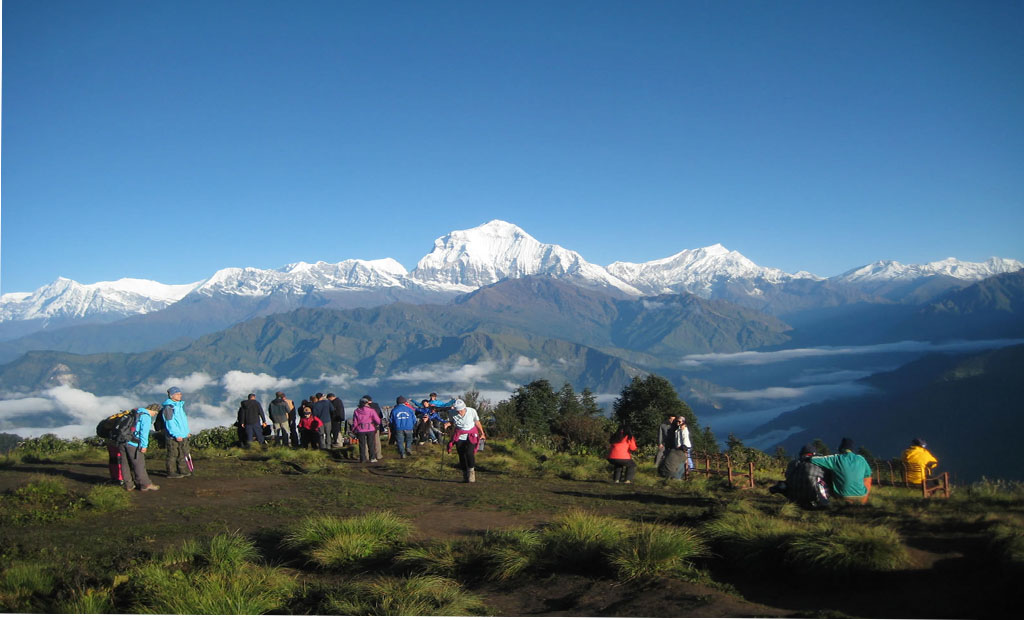 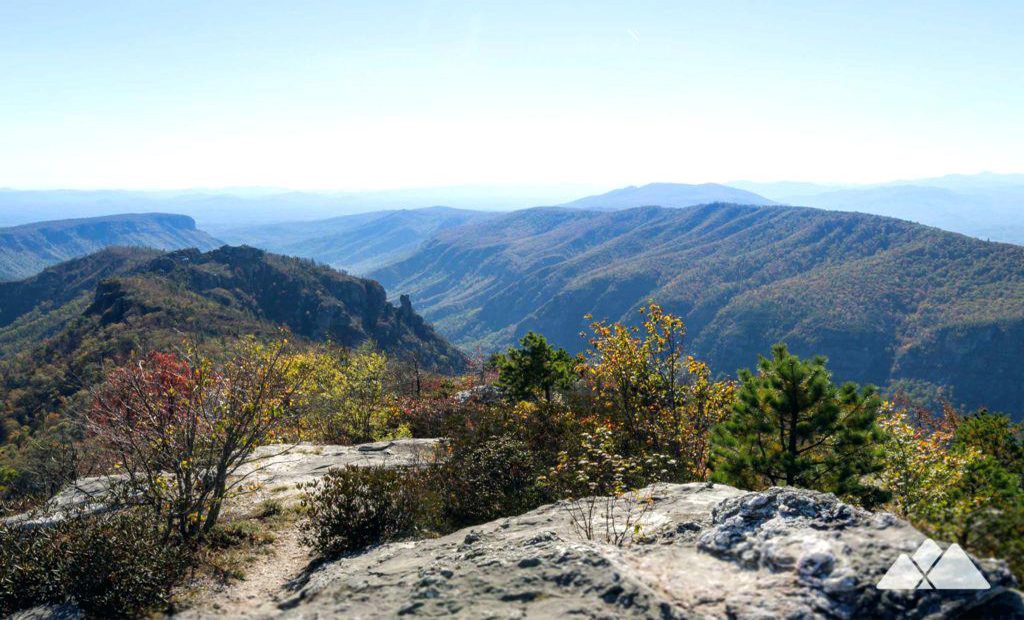 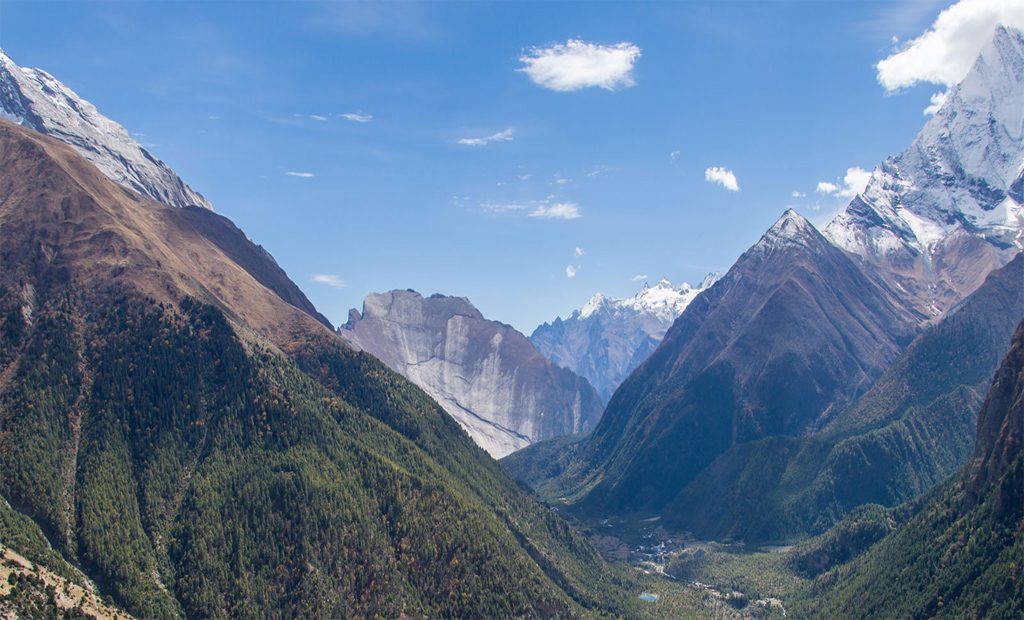 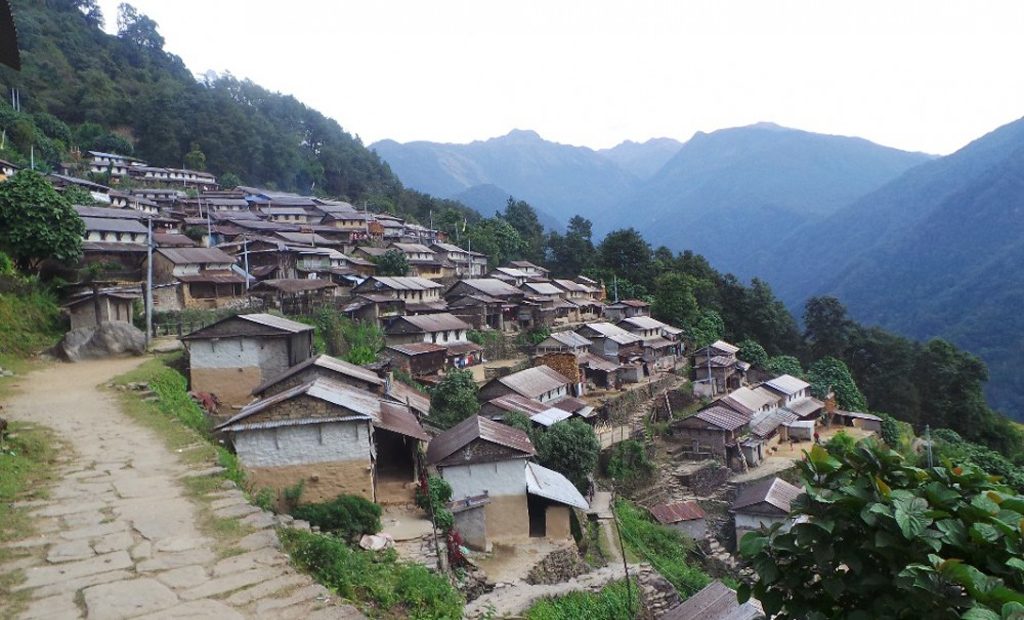 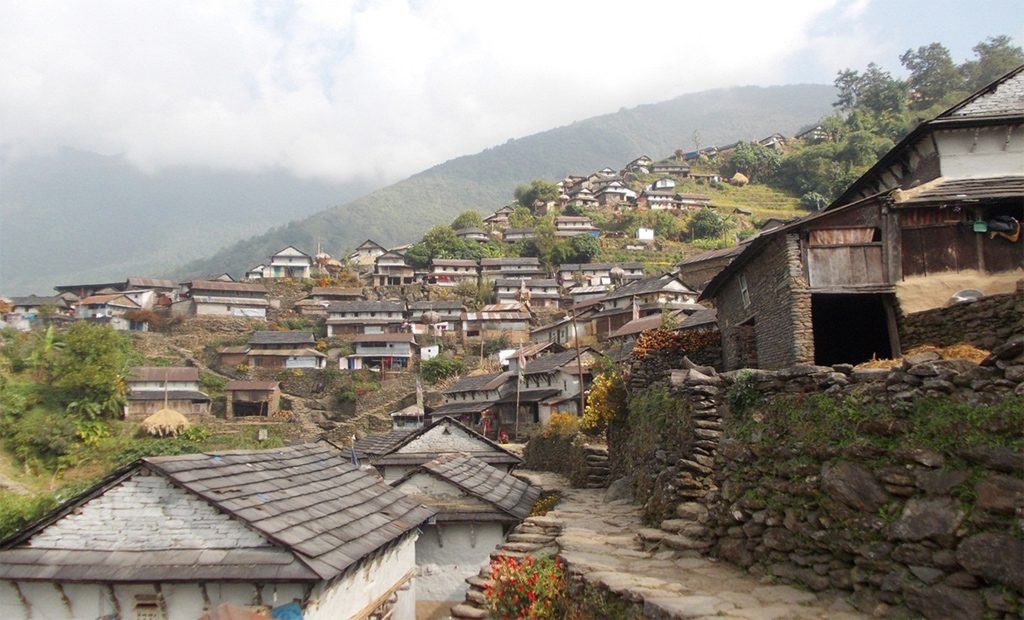 Siklish trekking is a short and popular trekking destination in Annapurna region trekking trail. This is the trek to an area, little frequented by westerners but is one of the largest Gurung villages in west Nepal. The Siklish trek starts from Pokhara with a drive to Lampata, passing through Ghale Gaon, Parje and Siklis – the largest Gurung settlements. From Siklish, the route turns east and stays along the ridge through Kalikathan and Shyaklung with a final night at Chisopani before descending to Pokhara via Rupa and Begnas lakes. This trekking probes an uncrowded corner of “The Annapurna Conservation Area” under the shadows of Lamjung Himal and Annapurna II and IV. This fabulous camping trek takes about a week, starting at Beganas Tal (Lake) and heading north to the Madi Khola, then following the river’s west bank up to a well-preserved Siklish (1,980m) – Nepal’s biggest Gurung village. From here, we strike westwards over the thickly forested ridge that separates the Madi and Seti Khola drainage’s and then descend via Ghachok, another Gurung settlement.

The Siklish trekking is off the main trails through villages of the Gurung people who belong to Tibetan origin. You walk through rice terraces and cornfields and then cut over a ridge clad in a lush forest with Machapuchare at times dominating the Annapurnas. (Trek to Siklish, Siklish Trek) Your highest camp is at 3000m, and from here you can reach a magnificent vantage point directly in front of Machapuchare (6993m), a fitting climax to a trip adorned with variety.

Rough and wild, this trek cuts through less traveled country south of Annapurna II & Lamjung Himal massif. It boasts good mountain views and the local people are unaccustomed to trekkers. It is a spectacular short trek and traverses a variety of terrain from low land villages and rice terraces up to Nepal ‘s largest Gurung (Gurkha) village (3000m,) as well as blooming forests of rhododendron in the spring.

Day 01: Kathmandu to Pokhara (914m.):-Drive from Kathmandu to Pokhara (914m.) which takes about six hours. You depart early morning at 7 o’clock for the six hours drive by tourist deluxe bus to Pokhara (915m,), 200 kilometers west of Kathmandu. As you climb out of the Kathmandu valley, only to quickly descend again to the Trisuli River, you follow upstream to its junction with the Marsyangdi River. You follow the Marsyandi gently up through heavily terraced fields and small hill towns to the Seti River that takes you directly into Pokhara. Having pleasant weather, Pokhara is tourist’s paradise with full of natural as well as cultural heritage sites such as lakes, caves, temples of Buddhist and Hindus along with mountains. You can observe views to the north across the hills and Phewa Tal (lake) to the white peaks of the Annapurna and Dhaulagiri ranges. This drive will take most of the morning, leaving much of the afternoon to fall in love with its beauty. You can also fly from Kathmandu to Pokhara which takes about 25 minutes.

Day 02: Pokhara to Bijayapur Khola (Bijayapur Army Camp)-Kalikasthan (1370m.)
Drive from Pokhara to Bijayapur Khola (Bijayapur Army Camp)-Kalikasthan (1370m.) which takes about five hours. A broad trail starts through rice fields near the Army Camp, and then ascends through Rakhigaon to a Chautara, a resting place under a large pipal tree. En route, you can enjoy the views in panorama. Now the trails climb gently along a ridge top through the Brahmin and Chhetris villages towards Kalikasthan at (1370m.). At the end, you should climb a short distance to the campsite which is situated above the village with panoramic view of mountain, Begnas Tal and Pokhara city.

Day 03: Kalikasthan to Lamachaur (1680m.):-Trek from Kalikasthan to LamaKhet (1680m.) which takes about six hours. You begin following gently path passing through local villages of mixed ethnic groups, rice terraces up to Mardi Khola. Now the trek is easy as you walk along the riverbank. En route you cross Bhaise, Nawaldanda, to reach Lama Khet. It is a small village where stay overnight. This place is surrounded by green hills which exhilarates you.

The trail stretches at flat level along the river bank until you reach Khilan Gaon. After this, you follow path which is gently up at some distance and steeply up for some hours. En route you pass Parju village. The trail again climbs till Siklis village. It is one of the oldest and big Gurung village. Most of the people serve in Indian and British Army.

Day 08: Pokhara to Kathmandu:-Drive from Pokhara to Kathmandu and it takes about seven hours. While driving from Pokhara to Kathmandu, you head up to Damauli,, Dumre, Muglin and Kurintar where the Nepal’s first Cable car is operated to reach to Manakamana Temple. En route, you could enjoy the mountain views, green sceneries, rice terrace fields, vegetable fields and people being engaged in their daily life activities. From Naubishe you climb up to Thankot, the gateway to capital city. You are then directly taken to the hotel

Day 09: Our journey in Nepal comes to an end today! We will drop International airport approximately 3 hours before our scheduled flight. Your own way to home, we have plenty of time to plan our next adventure in the wonderful country of Nepal.

OPENED: This date is available and open for bookings.
LIMITED: There are very limited number of available places on this departure. Immediate booking.
GUARANTEED: We have reached minimum numbers and this trip is guaranteed to depart.
CLOSED: This date is currently unavailable. Please contact us, if you are interested in travelling on this date.
Your Program Duration = 10 days Days
All the Prices are in GBP (£) Per Person.

The trekking (Trekking in Siklish) is off the main trails through villages of the Buddhist Gurung people of Tibetan origin. You walk through rice terraces and cornfields and then cut over a ridge clad in lush forest with Machapuchare at times dominating the Annapurnas. (Trek to Siklish, Siklish Trek) Your highest camp is at 3000m, and from here you can reach a magnificent vantage point directly in front of Machapuchare (6993m), a fitting climax to a trip adorned with variety.

Cost Is Not Included
• Food in Kathmandu Lunch & Dinner)
• Food in Pokhara (Lunch & Dinner)
• Bakery food during the trek. When you eat in the bakery that you need to pay by yourself
• Nepal Visa fee
• International airfare from your country to Kathmandu and from Kathmandu
• Extra night accommodation in Kathmandu
• Travel and rescue insurance if guest get mountain sickness and need to rescue helicopter.
• Personal expenses example (phone calls, laundry service , bar bills, battery recharge, extra porters, bottle or boiled water, shower etc)
• Tips for guide and porters